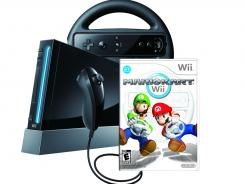 Nintendo has announced it will begin officially selling the Wii console for $150 bundled, starting May 15th.
The bundle includes a Wii remote, Mario Kart, and a steering wheel.

Nintendo will continue to sell the $169.99 bundle (which includes Wii Sports Resort and Wii Sports) until inventory runs out. From there, that price point will be discontinued.

There is quite a bit more volume to be sold on the Wii home console. And the way we are going to get there is by offering the system at this low price and by including a key software title like Mario Kart."

Mario Kart has sold over 10 million copies, making it one of the most popular games on the console.

Overall the Wii has sold 86 million Wii consoles, to date.

Quote:The Wii 2 (codename Stream) is expected to be released in early 2012 with specs that put the PS3 and Xbox 360 to shame.

From what I read, it will only be slightly better than the PS3 in certain ways, and not as good in others (the PS3 main processor is faster, in spite of being over 4 years old). I'm really not trying to talk up sony (regulars here know I want them to go bankrupt)...but it is just a simple fact. Of course, it does not really matter...most games will still be written to run on the 360, and thus the other consoles will be left with low quality graphics that make them look just like the 360.

Mario Kart Wii still sells extremely well, I sold my used copy about a year ago for the same price as a new one.

Originally posted by KillerBug: Of course, it does not really matter...most games will still be written to run on the 360, and thus the other consoles will be left with low quality graphics that make them look just like the 360.

AFAIK it's for two reasons:

1) Space - The XBox 360 currently has a maximum of ~9GB of space per game, unless it ships on multiple DVDs.

2) The 360 SDK is easier for programmers to work with. As a result they make games using it and port them to the PS3; and the games look practically identical.

Before anyone gets on me for attacking the 360, I owned one from launch until it died at the end of 2009. And might own another in the future although I'll probably just wait for the next-gen console.
"The only people who should buy Monster cable are people who light cigars with Benjamins." - Gizmodo
Comments have been disabled for this article.