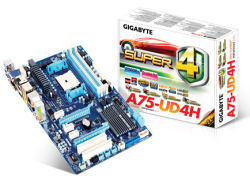 New boards for AMD Llano A8 and A6 Accelerated Processing Units (APU).
Gigabyte Technology Co. Ltd. launched its latest series of motherboards supporting the new AMD A75 series chipsets, and the latest AMD A-Series APUs. Gigabyte A75 based motherboards offer DIY PC builders and integrators a new world of 3D and multimedia performance with the most scalable, and best value upgrade path imaginable.

The new boards features an AMD A75 "Hudson" chipset supporting the latest 32 nanometer AMD A-Series APUs. These processors are the first ever to combine a DX11-capable, high performance graphics processor with a choice of a dual or quad core CPU in one silicon die.


"At Gigabyte, we are delighted to bring to market this new and exciting motherboard range, delivering our renowned durability and exceptional feature support to AMD's ground breaking APU technology," commented Henry Kao, VP of Worldwide Service and Marketing at Gigabyte.

It is too bad there is no hardware AES on these chips; not fast enough for gaming and no AES so useless for servers...next please.