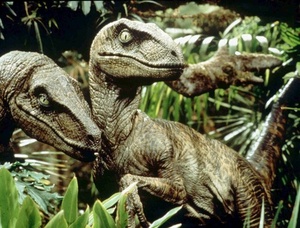 Western Digital has announced it will launch two new Velociraptor HDDs, offering 10,000rpm speeds to users who may not be ready to jump on the SSD bandwagon.
The 5th generation drives, released last year in 450GB and 600GB varieties, will now be available in 150GB and 300GB models.

Each drive will have native SATA 6Gbps support and 32MB of cache, replacing the older SATA II interface and 16MB cache.

The drives are available at a few retailers with greater availability in the next few weeks.
Tweet
Tags: western digital HDD Velociraptor 10,000RPM
<Wal-Mart is back in the movie rental business >Current free Fox TV shows to disappear behind pay wall
Previous Next

What kind of animal is that in the picture? This is a Velociraptor:

Originally posted by KillerBug: What kind of animal is that in the picture? This is a Velociraptor (...)


Both and none of them are. Velociraptors are extinct, so skin texture, color, scales, feathers, fur, or whatever other external details can't be known for sure, so they are kept for the imagination of the artist. ;)

"You know, it seems that quotes on the internet are becoming less and less reliable." -Abraham Lincoln.
327.7.2011 12:29
KillerBug
Send private message to this user
AfterDawn Addict

My bad...I thought they proved the feathers.

I prefer the naked raptors!

Originally posted by KillerBug: My bad...I thought they proved the feathers.

"You know, it seems that quotes on the internet are becoming less and less reliable." -Abraham Lincoln.
727.7.2011 20:56
toked
Send private message to this user
Junior Member

Kinda odd they are reducing capacity to 150GB/300GB when overall HDDs are near to 4TB soon - plus 240GB Sata-III SSDs are affordable at £200 with unbeatable performance. The cache should be 64MB to aid access times and bandwidth considering how cheap memory is as per normal HDDs specs.