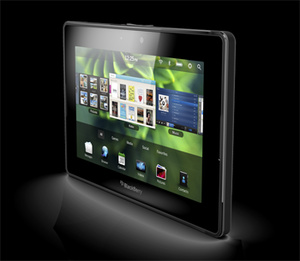 Sprint has noted today that it has killed off plans to release a WiMax 4G BlackBerry PlayBook, citing low demand.
RIM, maker of the BlackBerry, and Sprint, said it was a "mutual decision" to cancel the 4G tablet, which was announced in January.

The carrier will continue to sell the Wi-Fi-only model of the device and it is unclear whether AT&T and Verizon will make similar decisions to axe the 4G model.

Right now the majority of tablets are Wi-Fi only. People use tablets in fixed locations.

The 7-inch PlayBook came to the market to mixed reviews, mainly due to its lack of a native email app.
Tweet
Tags: Blackberry Sprint 4G tablet
<Spotify U.S. has over 1 million users already >Firefox 6 Final available very soon
Previous Next

I honestly think that this phone is the best thing that BlackBerry has ever done...or it would be if it was a phone. I know it is a little bigger than what people think of as phones, but it is just small enough to use as a handset and most people use bluetooth anyway. It is too small to compete in the tablet realm...it simply does not offer enough extra screen space compared to a smart phone...but if it was competing with smart phones, it would have the biggest screen on the market...a decided advantage for the very customer base that RIM was built on.