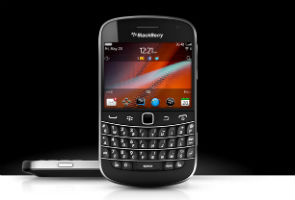 T-Mobile will get their first 4G BlackBerry on August 31st.
The BlackBerry Bold 9900 will cost $300 after rebate with contract, making it more expensive than high-end Android devices like the HTC Sensation 4G.

Running on the BlackBerry 7 OS, with a 1.2GHz Snapdragon processor, the device is also RIM's thinnest phone ever, at 0.41 inches thick.

BlackBerry 7, the last OS before the much anticipated QNX OS, is expected to offer a significantly improved browsing experience and better HTML5 performance.

The device, despite being extremely expensive, has also been critically panned in early reviews, being called a "subtle upgrade" from the Bolds released in 2008 and 2009.
Tweet
Tags: T-Mobile RIM BlackBerry 9900
<Best Buy bundles Galaxy Tab with HDTV for $1500 >LG cuts TV sales forecast
Previous Next

Blackberry phones are obsolete to me as soon as they hit the market. Half the screen size and small physical keyboards. No thanks.

They were once dominant, but iPhone and Android have killed them. Blackberry has fallen so far behind, they'll never catch up.

You'd have to be crazy or a Blackberry Zombie to buy one of these sure to fail devices.