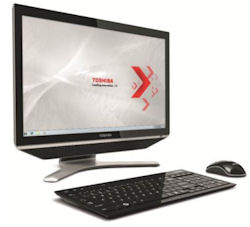 It is powered by the latest generation of Intel processors, can come with up to 6GB of memory and up to 1TB storage space. Selected models come with an integrated Blu-ray drive. For UK users, the DX730 doubles as a television setup with built-in Freeview support delivering a wide-range of digital channels without the need for a set-top box or Sat dish.

The Qosmio DX730 packs two USB 3.0 ports and four USB 2.0 ports for connecting smartphones, tablets and media players. An HDMI-In port lets you connect up any HDMI-equipped consumer electronics device, such as a games console.

For audio, the all-in-one PC comes with stereo speakers and a sub-woofer designed by Onkyo. Toshiba
Sleep-and-Music also lets users connect an MP3 player to the PC and play music through the speakers – even when the machine is switched off. 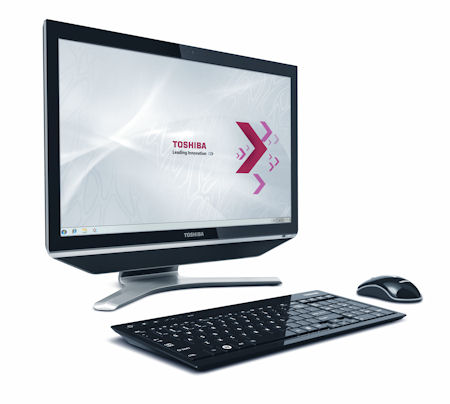 6 Toshiba articles in a row. Whats up with that?

Toshiba's been busy, nothing more to it than that.

This is a neat concept...I mean, when you realize that you bought a PC that isn't as good as your old laptop, you can simply use it as a crummy TV!

It doesn't seem all that terrible, at the max anyway. But that would make it ridiculously expensive I'd imagine >.> A Core i5, full 6 gigs of RAM, probably go for as small internal storage as possible and just hook up a cheap 2TB external HD, and it really wouldn't be too bad. Really only particularly note-worthy if it comes at a decent price, would be a perfect front-counter POS machine then.

Is this the first response to an IMAC from the PC makers?

looks ok to me.

Too bab it took them too long to enter the desktop field. If their desktop is anything like their laptops, I predict it will be a hit. Sure wish my desktop was a little older...