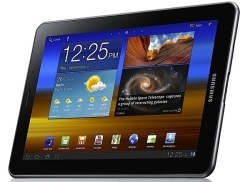 A Samsung spokesman said the company isn't worried that Apple's lawsuits will cause them to miss tablet sales projections for 2011.
Apple patent lawsuits around the world have already resulted in a delay of the Galaxy Tab 10.1 in Australia and a ban on sales of the tablet in most of Europe. However, the European ban is specifically against Samsung.

European retailers are still free to sell the tablet.

Samsung's J K Shin says the company expects to increase tablet sales by more than 5 times compared to last year according to Bloomberg. Since Samsung hasn't disclosed their 2010 numbers, it's hard to be sure exactly how many that is.

According to analysts, last year's sales were probably around 1.6 million, which would mean at least 8 million units sold this year if Samsung's prediction is accurate.

That would put them squarely in the lead among Android tablets, but still significantly behind Apple's industry leading iPad.
Tweet
Tags: Samsung Sales tablets Galaxy Tab 2011
<HTC Raider 4G pics, specs outed >Warner looks to expand 28 day release window beyond kiosks and online rental
Previous Next
Comments have been disabled for this article.