RIM brushes off rumors the PlayBook is dead 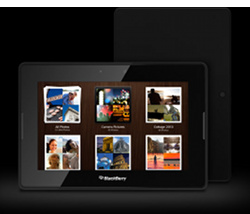 RIM has no intention of giving up on the tablet market according to an email from a company spokeswoman.
The PlayBook initially sold well after its release in April. More recently lagging sales have led to RIM rethinking plans for a 4G model and drastically reduced prices.

In an email to Reuters, RIM's Marisa Conway called rumors the PlayBook will be discontinued, "pure fiction." She went on to say, "RIM remains highly committed to the tablet market and the future of QNX in its platform."

The rumors she was referring to started with an analyst's note yesterday claiming RIM had discontinued production on the tablet and cancelled development on additional models.

Of course it's hard to imagine what RIM would stand to gain from getting out of the tablet market. Unlike HP, who gave up on their tablet operation last month, tablets are essentially part of RIM's core business.

If they can't get a foothold in the tablet market, it seems unlikely their smartphone business will keep them afloat for long.

Certainly they haven't managed to do that yet, but it's important to remember the tablet market is still in its infancy. If RIM gives up on it now, it may be time to start entertaining buyout offers.

In that case it's likely their intellectual property, particularly a large number of software patents, would make up most of their value.
Tweet
Tags: RIM RIM PlayBook tablets
<Future Amazon tablets may run WebOS >Verizon sues FCC over net neutrality rules
Previous Next

They are not even trying on the thing...STILL no 4G version, still won't tether to anything except a crummy blackberry phone, still can't make phone calls, and about to be drastically overpriced as soon as the Amazon tablet comes out. They haven't given it a sliver of a chance.

What else should we expect from rim? They don't seem to know what they are doing at the moment. Releasing all kind of phones and mobile OS's that leave newly released phones obsolete with the space of a week because they can't be upgrade to QNX. What do you want to use BBOS7 or QNX make up your mind BB. Can the playbook even run android apps natively like they promised it would from launch? I personally haven't used the device as yet but I heard from a friend of mind who is quite creditable that it is pretty laggy in the performance so I don't know.