Steve Ballmer: Microsoft 'lucky' it got rejected by Yahoo in 2008 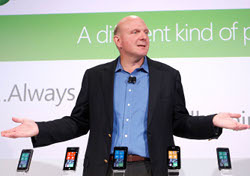 Speaking at the Web 2.0 Summit in San Francisco this week, Microsoft CEO Steve Ballmer has said the company is lucky it did not purchase Yahoo! in 2008.
When asked by the speaker "Are you glad you didn't buy Yahoo?," Ballmer responded, "You know, times change. When you ask any CEO [that type of question] after the market has fallen apart, it's 'hallelujah.' Sometimes, you're lucky."

In 2008, Microsoft made a massive unsolicited $47.5 billion bid for Yahoo, in an effort to merge the companies and better compete against Google in major markets. Yahoo co-founder Jerry Yang rejected the offer using a poison pill plan.

At the time, Yahoo was valued at around $40 billion. That figure has collapsed to just over $20 billion today, so it does seem that Microsoft got "lucky" in getting rejected.

MS definitely got the better end of this deal; yahoo should have sold.

Not a very good judge of estimated economic gains/losses. Yahoo's stock fell under Yahoo's management. It's a fallacy to assume that the same would have happened under MS management and resources; although you could make a strong argument that it would.