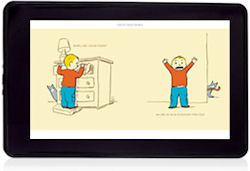 Third quarter net income reported at $63 million.
Amazon's profits have dropped 73 percent after the company invested heavily in the Kindle Fire tablet computer, according to the online retailer. As a result, Amazon's shared dropped 12 percent in after hours trading with questions about the web giant's business in the air.

Still, Amazon said that sales had grown by 44 percent. On September 28, it experienced its biggest ever day for Kindle orders, surpassing even previous peak sales during holiday seasons.

"In the three weeks since launch, orders for electronic ink Kindles are double the previous launch. And based on what we're seeing with Kindle Fire pre-orders, we're increasing capacity and building millions more than we'd already planned," said Jeff Bezos, Founder and CEO of Amazon.

The web giant forecast lower-than-expected sales during the next quarter, despite the holiday season , and warned it could see an operating loss as it continues to invest in the Kindle Fire tablet.
Tweet
Tags: Amazon Amazon Kindle Fire
<Dropbox gives 5GB cloud storage to HTC Android smartphones >Hacked anti-piracy firm gets back to work
Previous Next

If Amazon had released the rumored quad core 10" 3.2 honeycomb tablet at a $300.00 price point then maybe they would not be in a shitty situation going forward. The tablet they released is crap and my Acer Iconia is by far better. Lucky for amazon they corner online sales so they will survive but taking a risk like this with that tablet was stupid.