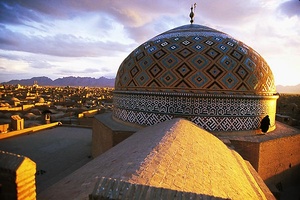 Iran has confirmed today that their computer defense systems have been hit by the super-virus dubbed "Duqu."
Last year, the "Stuxnet" worm successfully knocked out the Iranian nuclear centrifuges, the devices used to enrich uranium.

We are in the initial phase of fighting the Duqu virus. The final report which says which organisations the virus has spread to and what its impacts are has not been completed yet.

All the organisations and centers that could be susceptible to being contaminated are being controlled.

Duqu, unlike Stuxnet which actually altered the speed of the centrifuges causing them to break down, seems to be aimed at gaining remote access to computer systems.

Security firm Symantec had this to say about Duqu (via The Telegraph):


It is apparent to Symantec that the authors of this new threat had access to the Stuxnet source code, not just Stuxnet binaries.

Duqu's purpose is to gather intelligence data and assets from entities, such as industrial control system manufacturers, in order to more easily conduct a future attack against another third party.

The attackers are looking for information such as design documents that could help them mount a future attack on an industrial control facility. Thus, Duqu is essentially the precursor to a future Stuxnet-like attack.

I'm calling it right now that the US Government did this..why you may ask? I remember reading an article that one of the options to attack Gaddafi(I apologize for possible misspeling) was to attack the Libyan Government Computer Systems with YOU GUESSED IT By HACKING!

Originally posted by Tristan_2: I'm calling it right now that the US Government did this..why you may ask? I remember reading an article that one of the options to attack Gaddafi(I apologize for possible misspeling) was to attack the Libyan Government Computer Systems with YOU GUESSED IT By HACKING!

No, no. Most likely is was Tel Aviv. They designed the first virus that crippled the Iranian's nuclear program.
Forza Juve!!
330.11.2011 03:25
eLeCTR0n
Send private message to this user
Member

You're both right. It was probably the US and Israeli governments working together to do this which is an act of war according the US guidelines. But then we should be surprised when Iran takes extra measures in building and buying defense to help protect itself.

I couldn't help but think of the first Assassin's Creed after looking at the provided picture.

The US has already admitted to involvement with the Stuxnet attack. Simply google "us admits stuxnet", and you'll be confronted by a large number of references.