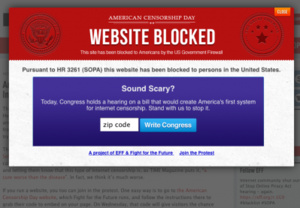 The SOPA (Stop Online Piracy Act) bill has been dubbed draconian by a number of tech giants, including Google and Facebook.
Both companies say the bill is too strict and will lead to an incredible amount of unintended consequences.

If SOPA was to pass, copyright holders could complain and have websites shutdown. Additionally, payment processors and search engines will have to block those sites, as well.

Outside of Google and Facebook - AOL, eBay, LinkedIn, Mozila, Yahoo, Twitter and Zynga filed the formal complaint with key Senate and House lawmakers.

Reads the complaint (via CNN):

We support the bills' stated goals. Unfortunately, the bills as drafted would expose law-abiding U.S. Internet and technology companies to new uncertain liabilities [and] mandates that would require monitoring of web sites.

SOPA is backed by the MPAA and RIAA.
Tweet
Tags: SOPA anti-piracy bill
<Google Music moves out of beta, adds download store >Rumor: Xbox Next to be unveiled in 2012
Previous Next

Quote:SOPA was proposed as a way to censor sites like The Pirate Bay.

No it wasn't...it just blocks domain names; not IP addresses. It was proposed to eliminate sites like YouTube.

But isn't this the one where if it is found people were bypassing the web site's name that they can be prosecuted or was tht the e-parasite or some other rediculous legislation? I would think that entering an IP to avoid DNS resolution would/could be considered an attempt to bypass this.

Everyone sign up, please (if you are in America)


AfterDawn News
AfterDawn Guides
One of the largest collections of software on the Web: AfterDawn Software Section
417.11.2011 01:13
vurbal
Send private message to this user
Staff Member

Quote:SOPA was proposed as a way to censor sites like The Pirate Bay.

No it wasn't...it just blocks domain names; not IP addresses. It was proposed to eliminate sites like YouTube.

Actually SOPA goes further. It requires ISPs to take measures beyond simple DNS redirection to block access to websites. The language was specifically changed from PROTECT IP after it the lobbyists who write this sort of legislation realized DNS redirection would be so trivial to bypass.

But you're absolutely correct it's first big target is likely to be YouTube since it mirrors the claims in Viacom's failed lawsuit which were shot down by the judge because of DMCA protections.
Rich Fiscus
@Vurbal on Twitter
AfterDawn Staff Writer
517.11.2011 02:45
Xplorer4
Send private message to this user
Senior Member


That doesnt mean they cant throw money at the situation.

You make a good point; bribes started this; they can end it too!

As An American I just want to say wow we are becoming no better then China by blocking any info and who is it to say that next year every site that offends anyone with a religious bent isn't shut down or how about when you want to do a background check on someone of importance are they going to shut that option down next then the News ( oh wait they don't report the truth) so they and the daily show are safe...look its time that everyone pay attention we already lost a lot of ground that was fought and won in the sixties. with the patriot act . next unless the government allows you to visit the site you will never know... how many of you know of a product called an (I Station)its from North Korea about 8 years ago and its not sold in the USA due to being able to record a song off the radio to mp3 on this unit... this shows the power of lobbyist at Washington it came out before the I pod... funny how the unit that dosn't let you record music is ok....

Actually, we are worse than China in a lot of ways; take a round-trip flight to and from China and you will see what I mean; a US citizen entering china gets less harassment from Chinese airport security than they will get from US security when they come back!


Well, testifying doesn't really mean much. The reason it was a sure bet it would pass before had nothing to do with anyone's testimony and everything to do with who owns the politicians. You don't get to write laws and have them sponsored in Congress unless you own quite a few, and that's how laws like this happen.

Likewise, if it doesn't pass, it will be because of the high profile SOPA is getting. That's where other tech companies can do something. Unfortunately, through their association with the Business Software Alliance, the biggest companies, like Microsoft and Apple, actually end up providing support for bills like this. Likewise, due to their concern about relationships with the entertainment industry, they wouldn't take a visible role in any case.
Rich Fiscus
@Vurbal on Twitter
AfterDawn Staff Writer
Comments have been disabled for this article.