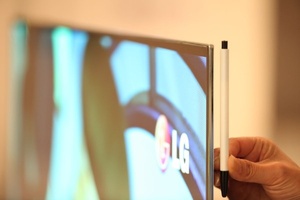 LG Display has announced it will unveil its new 55-inch OLED TV at CES next month.
The TV will be the largest ever OLED screen, and LG has hinted that it will be much more affordable (per inch) than past commercial OLED screens. For example, in 2008 Sony released an 11-inch OLED for $2200.

OLED displays are mainly seen now in phones and watches, where they are extremely cost efficient. Adds Beom Han, CEO and Executive Vice President of LG Display: Our objective has always been to actively define and lead emerging display technology markets. Although OLED technology is seen as the future of TV display, the technology has been limited to smaller display sizes and by high costs, until now. LG Display's 55-inch OLED TV panel has overcome these barriers."

LG says the new TV has wider color gamut than LCD screens, and a contrast ratio of 100,000:1. Furthermore, "the new technology allows light emitting diodes to self-generate light and features a reaction velocity to electric signals over 1000 times faster than liquid crystal."

LG explains that "WOLED vertically accumulates red, green, and blue diodes. With white color light emitting from the diode, it displays screen information through color layers below the TFT base panel, which leads to a lower error rate, higher productivity, and a clearer Ultra Definition screen via the benefits of small pixels. Further, it is possible to realize identical colors in diverse angles via color information displayed through a thin layer. Lower electricity consumption in web browsing environments for smart TVs is another key strength of WOLED."
Tweet
Tags: LG CES OLED 55-inch
<Samsung buys out Sony's share in joint LCD venture >LG shows off Ice Cream Sandwich upgrade roadmap
Previous Next

Actually the price will be high , but not that high as the first plasma models for 35.000 usd
even more advanced TV technology coming soon from Samsung - Amoled TV - hope they will show us it on CES too - check on www.amoledtv.com

Can't wait for OLED TVs.............will buy one as soone as they become reasonably affordable.

I would love to game on one of these.

Yayh!
So now we can do away with that stupid marketing BS about 'dynamic' contrast ratios and go back to true ones?
Happy days.