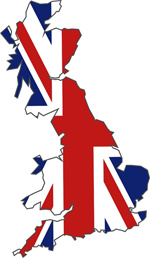 The UK box office broke 1 billion pounds last year, for the first time in history.
The British Film Institute's research says the market can thank Harry Potter, a stuttering king and "The Inbetweeners."

Harry Potter and the Deathly Hallows - Part 2 came in first with £73 million in sales, followed by King's Speech at £46 million and the Inbetweeners at £45 million. The overall market rose 5 percent from 2010 as did admissions.

The milestone was likely hit not only due to strong ticket sales, however. Ticket prices rose 17.5 percent across the board starting in January 2011.

Concludes the Institute (via THR): "2011's production figures are further evidence that the UK is home to some of the world's most talented and sought-after film-making talent. Coupled with our excellent infrastructure and facilities, the U.K. film industry is continuing to have a positive impact on the economy, which at the moment is something which should be celebrated and of which we should be proud."
Tweet
Tags: UK Harry Potter Box Office Ticket Sales Pounds
<RedLynx denies leaking its own game to torrent sites >T-Mobile goes truly unlimited in Europe
Previous Next

I'm just wondering at what point people just tell the so-called entertainment industry to do one with their crazy anti-consumer 'security' making CE products a total PITA when it goes wrong & their attempts to ruin the net with their stunningly exaggerated greed & silly claims?

The entertainment business remains one of the most profitable enteerprises on the planet, possibly second only to the global energy producers.....

.....but we're supposed to believe file sharing is making the sky fall down.

It's pathetic.
I do buy films but I watch aghast as this trumped up nonsense continues as the annual record profits keep on coming year after year.

The Emperor has no clothes.

"Broke a billion pounds for the first time in history"????

Isn't that like saying "He was born for the first time in his life"???

Making a quality product sure helps! But if ticket prices go any higher people won't be able to afford it and will go back to pirating. Took in a 3D matinee the other weekend with my son and the tickets cost me $18. No popcorn or anything!