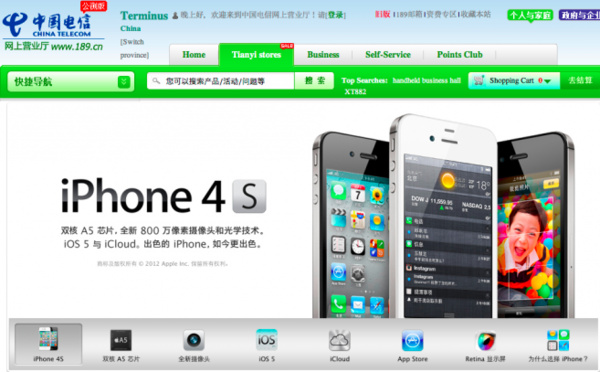 China Telecom has announced today that it will begin offering the iPhone 4S in March.
The carrier has 130 million subscribers in China, many of which are Apple fans and purchasers of past generations of the popular smartphone.

Altogether, China Telecom has 200 million customers in mainland China including their mobile, land line and broadband customers. The carrier also claims to have the largest CDMA network in the world.

Apple's response (via 9to5): "The iPhone 4S has been an incredible hit with customers around the world. We're thrilled to be launching iPhone 4S with China Telecom and can. t wait to get it into the hands of even more customers in China."

All models of the device will be available and base models will be free with contract.
Tweet
Tags: Apple China Telecom iPhone 4S
<RIM PlayBook finally gets a native email app >Canonical unveils Ubuntu for Android smartphones
Previous Next

And CrApple's influential hand of control will now be felt throughout China ass well. One bite at a time anyway. Not that the idea of mindless obedience is lost on the Chinese people, but at least CrApple will finally get those R&D numbers they always want from 'implanted' apps from a more compliant populace than those damned, noncompliant, free thinking, constitutional-ised people. You know, the ones who demand that tracking software & personal uploading keyloggers be removed.