Angry Birds gets an animated series 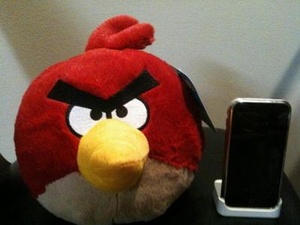 Rovio has announced today that it will be creating an animated series based on its popular Angry Birds game.
The series will be weekly starting in Autumn, with 52 episodes planned. Each episode will be about 2.5-3 minutes long.

"We're looking at building a video app for that, and we're also looking at partnerships and so on... We want to be on all screens."

One such partnership is the deal Rovio announced at CES with Samsung to have a Rovio channel on all new Samsung SmartTV web-connected TVs.

Dorra also hinted that an Angry Birds movie is coming, but not until after 2014.
Tweet
Tags: Angry Birds Rovio TV Animated Series Movie
<AOL patents not worth too much, says firm >GAME sold to private investors
Previous Next

I would say that there is about a fifty percent chance of the failing. I can just see the same thing happening to the series as what happened to the attempted Gieco Caveman Sitcom. It just didn't take off. Heh.

over-saturation.
I can hear the FONZ warming up his bike to jump the shark!