Conan O'Brien to voice a character in 'Halo 4' 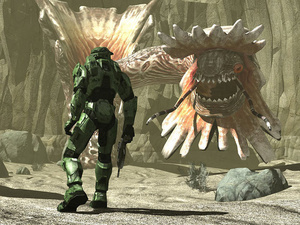 Late-night TV show host Conan O'Brien has announced today that he will voice a character in the upcoming Halo 4 game.
Halo 4 is one of the year's most anticipated games and Microsoft recently announced the sequel will launch on November 6th.

Besides O'Brien, his right-hand man Andy Richter will also voice another character. Both characters will be two Marines that Master Chief encounters along the way.

Franchise director Frank O'Connor says both will be "living out a real moment" although he did not elaborate.

O'Brien would say nothing more than that he is a "clerk in a loading dock," with "a gun, but I don't know how to use it."

Interesting but smart? I thought the last Halo released was to be the last and final halo game.

Yea, that's what I thought about the god of war series too, but Halo: Reach was simply the last Halo that Bungie was going to make, halo 4 is being created by Microsoft's 343 industries. Can't really blame Microsoft or Sony for wanting to keep on milking the cash cow console exclusives.

I would think that Conan O'Brien would kill it and this will be the last of the series but then there are many youngsters that actually think he is OK so you never know it may help.