Written by Andre Yoskowitz @ 27 Apr 2012 10:26 User comments (1)
According to iSuppli and Strategy Analytics, Samsung topped mobile phone shipments for the Q1 2012, beating out rival Apple.
Samsung controlled a massive 30.6 percent market share for the quarter, up from 12.2 percent in the same quarter in 2011. Apple saw strong growth, as well, to 24.1 percent from 18.1 percent.

Says Strategy Analytics of the data: "Samsung and Apple are outcompeting most of their major rivals and the smartphone market is at risk of becoming a two-horse race. Samsung's global smartphone shipments rose 253 percent annually...as demand surged for its popular Galaxy models such as the Note, S2 and Y."

Nokia saw a striking decline, from 23.5 percent to just 8.2 percent as they discontinued their Symbian devices and only just began offering Windows Phone 7 devices. Adds the research firm: "Nokia's new Microsoft Lumia portfolio has recently gotten off to an encouraging start in the critical United States market, but shipments there are not yet large enough to offset the firm's tumbling Symbian volumes in the rest of the world."

While Samsung ruled the overall market, Apple remained the champion of smartphones, shipping 35 million in the quarter, beating out Samsung at 32 million. 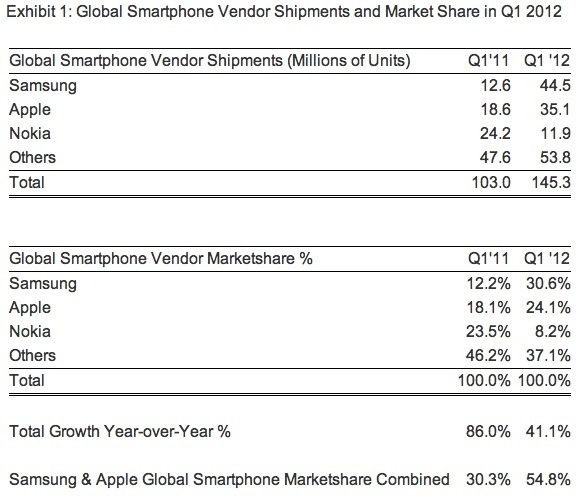 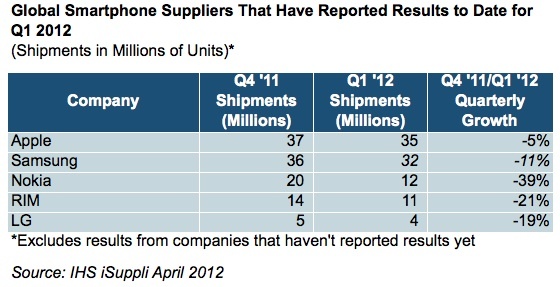 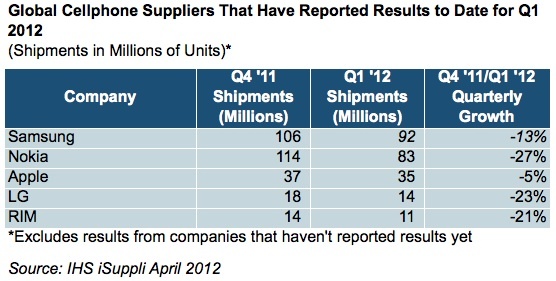 Samsung is always talking "shipped" numbers. Wonder how many of their 500 phone models they actually "sold".