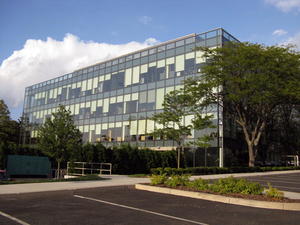 Six years after its purchase, Nokia is selling its New York headquarters at a large loss.
In 2006, the company purchased the office building in Harrison, NY and reconstructed it, spending just above $30 million in the process.

This week, the company has sold the building to biotech company Histogenetics for $12 million. Michael Rao, president of New York Commercial Realty Group, who represents the buyer, was very happy with the deal: "It's a great deal for 12 million bucks. The building is gorgeous. It's so spectacular."

Nokia was forced to put the building on the market as part of a global downsizing to save on costs as the company struggles to remain relevant.

The company posted a large $1.7 billion loss in the recent quarter after losing $1.2 billion in the first quarter as its Windows Phone devices just started heading to market.
Tweet
Tags: Nokia Sale headquarters harrison
<Google tweaks Gmail with better Google+ integration >Raspberry Pi mini-PC getting camera module
Previous Next Write a comment
Comments have been disabled for this article.