Recent headlines | Google, Spotify and many other major websites are all down across the globe 3
AfterDawn > News > Sony and Panasonic to announce OLED partnership 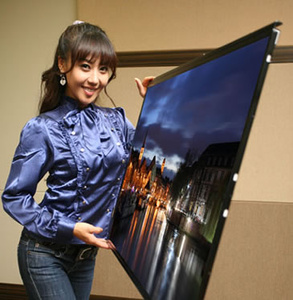 According to Reuters sources, Sony and Pansonic will team up for an OLED TV partnership.
The deal will be announced next week and be an "agreement to cooperate in developing ways to mass produce next generation organic light emitting diode (OLED) televisions."

Both companies will develop tech to build the displays cheaper. Sony and Panasonic are looking to compete against South Korea's LG and Samsung, the companies which knocked them from their perch as the kings of TV sales due to aggressive pricing.

The new deal will have both companies pool their research and development resources to regain some of that ground.
Tweet
Tags: Sony Panasonic Partnership OLED
<HTC to drop out of Brazilian market >Microsoft to phase out Office 2010 Starter
Previous Next

yes,it seems Sony and Panasonic will cooperate..waiting for the LED tv

They could beat LG if either company had decent management...but each company has restrictive management and now this venture will be double restricted, probably more since both companies will try to screw eachother by cutting their own r&d and relying on the other. Even if they were to produce for a lower cost, they would cut quality and keep the prices high.

Originally posted by KillerBug: They could beat LG if either company had decent management...

Ding ding ding ding! We have a winner Bob! Panasonic has always kinda had a pretty decent hold on things as far as I've been concerned. Not to shallow, not to deep. Tepid if you will. Sony likes to come in & piss in the punch bowl.

If this little 'venture' goes through because of Sony's little racist hissy with Samsung, then it'll be the worst decision Panasonic will have ever made.
http://onlyinrussellsworld.blogspot.com
Comments have been disabled for this article.