Galaxy S III delayed on Verizon until the 12th 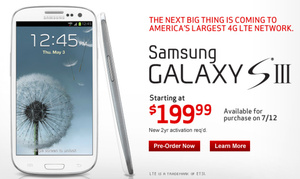 Verizon has confirmed that the Galaxy S III will finally reach the carrier on July 12th, after a slight delay.
The carrier had initially announced the phone would launch online and in retail stores on July 10th.

If you pre-ordered the phone, you will still get it (or already have) but for those that like to actually feel the device in-store, you will have to wait a couple more days.

The phone sells for $199 with two-year contract via the carrier.

Verizon is reportedly ruining this phone with their lock-down bootloader policy. It won't be the same development friendly & updateable phone that it is on other carriers. Best to find a new carrier if you want this phone.