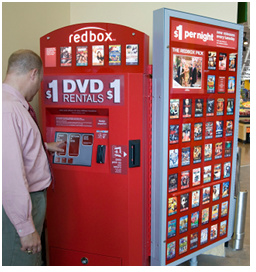 Redbox, Warner end stand off.
Redbox had decided to allow its contract with Warner expire, since the studio was demanding that a 28 day window in which Redbox could not offer its new Blu-rays and DVDs for rentals, should be extended to 56 days.

The low-cost rentals provider decided that 56 days was just too long and said it would purchase Warner movies elsewhere.

Fast forward several months and now the two seem to have made up, and come to a new arrangement - or well, more or less the arrangement they had before Warner tried to extend the release window to 28 days. The agreement is valid between January 1, 2013 and December 31, 2014.

"We are pleased to once again have a direct relationship with Redbox, providing their consumers access to our movies," said Ron Sanders, president, Warner Home Video.

"In addition, we look forward to working together on other key initiatives such as UltraViolet and creating promotional opportunities to offer consumers great content when and where they want it."

Movie studios have argued that low-cost rentals available for kiosks on the same day as a Blu-ray or DVD release result in less revenue, as consumers opt to rent rather than buy. This is how the release window was born, but with more digital options becoming available, can studios continue to enforce niceties such as limited release windows?
Tweet
Tags: Redbox Warner Bros Warner Home Video
<Yahoo won't recognize 'Do Not Track' in Internet Explorer 10 >Huawei partner tried to sell U.S. tech to Iran
Previous Next

Well, uh...they make nothing if people download them from a torrent. Instead of playing stupid games they need to just rent and sell all content at the same time. Because the quality of movies over the years has been piss poor. So I'm a solid rent-before-I-buy type. If I like it, or love it I WILL buy it. If it's horrible after I rent it I'm done with it. And I won't wait...or impulse buy.

Instead of playing games, making excuses, they need to make better movies.

I'm having a hard time understanding the studios logic on this one. Not enough people bought within the 28 day window, so extend it to 56? I have to agree with the previous poster, if I rent it and like it, I'll buy it; a release window wouldn't have an effect. I'm glad Red Box held their ground on this one, if for no other reason than to make a statement to the studio.

It's just pure and simple greed. if they would think logically, i.e. if someone wants to rent a movie they obviously don't want to buy it right now. By removing the option you manipulate the customer to buy something they aren't sure they want. Sadly in this society the need to have it right now overrides alot of people sense of better judgement.

Unfortunately by Warner being greedy pricks that are still trying to sell physical movies they are killing the last offerings of disc based rental. Within the next 5 years there won't be a concept of renting a movie to see if you'd like to buy it, or if the extras make it worth the buy. This in turn will possibly make extras and deleted scenes not available or even a thought.

Here's a thought though, instead of single movie releases with basic features or tv shows with 3~4 episodes on a disc, why not focus the physical media on collectors and die hard fans. Every movie/tv show/etc will have a download but why not make a top shelf piece of memorabilia to keep the physical idea of entertainment alive.

Originally posted by jookycola: Well, uh...they make nothing if people download them from a torrent. Instead of playing stupid games they need to just rent and sell all content at the same time. Because the quality of movies over the years has been piss poor. So I'm a solid rent-before-I-buy type. If I like it, or love it I WILL buy it. If it's horrible after I rent it I'm done with it. And I won't wait...or impulse buy.

Instead of playing games, making excuses, they need to make better movies.


Yet ANOTHER leecher that justifies rampant piracy and digital theft by blaming Hollywood. Name one movie out of all this "crap" in the past 2 or 3 years that you bought after having 1. watched and loved in theatres and 2. loved it from renting it.

WHATEVER!
Many many many movies are not "piss poor" and I would bet my bottom dollar that you have not bought more than a movie or two in recent years, after having rented it and saying to yourself "boy, I really liked that movie I just rented, I think I'll go out and buy it".

I'd love to come to your house and see all these "supposed movies you actually loved enough to rent then buy". IMO....NON-EXISTENT!

Stop blaming and making excuses and stop rampant piracy without giving something back....GO OUT AND BUY A MOVIE HERE AND THERE!

You think the movies from "hollywood" (yeah..like Hollywood has anything to do with the actual creativity from individuals directing/producing/creating movies) all suck hmmmmmmm??? THEN DON'T EVER WATCH A MOVIE AGAIN AND STFU!

In regards to this article, I will say that 56 days is RIDICULOUS!!!!!! What total crap!! This is nothing that brick and mortar stores had to or presently have to go through.
529.10.2012 18:40
JST1946
Send private message to this user
Senior Member

Sounds like someone needs to take a class in anger managment.

Originally posted by JST1946: Sounds like someone needs to take a class in anger managment.

Yeah, this guy has issues. I JUST bought the blu-ray of "Lockout" after renting it and loving it....idiot. I also never said I download movies, I said studios playing games causes people to download torrents...and that's true. This "Hearme" guy is a pointeless ranting dipshit.