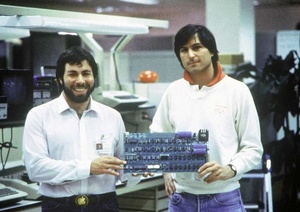 Earlier this week, Steve Jobs biopic 'jOBS' made its debut at Sundance, showcasing Ashton Kutcher as the late Apple co-founder.
According to one report, Apple's other co-founder, Steve Wozniak was asked for input on the early original screenplay, but decided against it.

"I was approached early on [for jOBS]," Woz says. "I read a script as far as I could stomach it and felt it was crap. The Sony people got in contact with me too and in the end I went with them. You can't do both [films] and be paid."

Sony Pictures is creating another biopic, with Aaron Sorkin producing, set for release later in the year. The Sony film will have just three scenes, all filmed in real-time, showcasing the birth of the Mac, the birth of NeXT, and the birth of the iPod in 2001.

Woz continues: "The early script did things like promote drugs in ways that were as foreign as the clip I saw. For example, it would have Jobs offering me drugs. I never saw Jobs do drugs nor had any offers from him. If we ever discussed drugs, he would have known that I didn't do them but that I basically approved of them and hung around with friends who did them (in college) so he wouldn't have felt awkward talking about them with me. Frankly, we talked about our jobs and technology and things." However, "I still told everyone that I thought the Jobs movie would be a big hit and I looked forward to it. I felt they did a very good job of casting, looking for good actors who could play the roles."
Tweet
Tags: Steve Jobs Jobs steve wozniak script
<40 percent of Mega resellers pull PayPal processing support >CEA: "AutoHop" is protected tech
Previous Next

I think a book is enough.

Trying to immortalize Jobs with a crappy movie is doing a lot of damage.

Originally posted by PraisesToAllah: I think a book is enough.

Trying to immortalize Jobs with a crappy movie is doing a lot of damage.

Uh, it's a big infomercial for Apple. Getting people to pay to see it is genius. I wonder if Facebook got a bump from "the social network" also released by Sony pictures?
Comments have been disabled for this article.