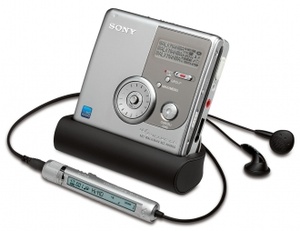 Sony has announced today that they will be finally completely discontinuing the MiniDisc player, after 21 years.
The company announced two years ago that it was planning to kill off the music player, and the final units will leave the factory at the end of February.

Debuted in 1992, the MiniDisc was created to be a more portable version of the CD, and indeed it was about half the size while including the same storage capacity.

The player had mediocre sales in the U.S. due to its pricing and lack of a large catalog for the format. The device did see stronger sales in Sony's home country of Japan.

I feel so old...I had one of those when they were new. Actually somewhat useful before flash memory (the discman never had a record button).

I lump Minidisc in with APS for cameras - an impressive new technology that was short lived due to how much the portable digital media device revolutionised the world...