BlackBerry Z10 off to hotter start than Lumia 920? 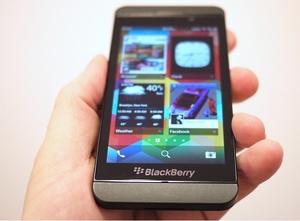 According to multiple analyst notes, the new BlackBerry Z10 is off to a hotter start than expected, even moving units faster than the Nokia Lumia 920 did.
Bernstein analyst Pierre Ferragu says retail checks show enthusiasm for the new phone: "We have grown more confident in the likely success of the BlackBerry 10 launch, supported by low channel inventories, strong operator support and material pent-up demand. Initial feedback we have received from distributors on the first days of sales is particularly positive."

Barclays' Jeff Kvaal, did retail channel checks in the UK and had a similar outlook, "Our recent store checks suggest that initial sales of the BlackBerry Z10 are off to a solid, if not healthy start in the U.K. We believe this is a function of strong sell-through versus limited sell-in. We believe BlackBerry's Z10 is off to a better start than the Lumia 920. The solid initial demand is a positive step in our view, despite the number of challenges that remain."

For Blackberry (formerly RIM), this is absolutely good news, assuming that the strong sell-through is based on demand and not just limited supply.

The device will reach the U.S. in March.

Doesn't surprise me. The new Blackberries look quite decent indeed, while nobody in their right mind would take a WP device unless paid to do so.

Originally posted by Taalen: Doesn't surprise me. The new Blackberries look quite decent indeed, while nobody in their right mind would take a WP device unless paid to do so.


Of course, you have used and deeply analyzed one of each prior to that statement. I haven't, but for what I saw online, the Lumia 920 is a much better device.
"You know, it seems that quotes on the internet are becoming less and less reliable." -Abraham Lincoln.
Comments have been disabled for this article.