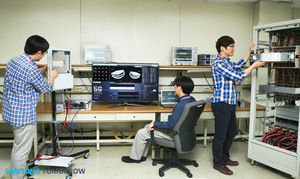 Samsung Electronics has claimed a breakthrough in development of wireless communications technology that will be at the core of 5G networks.
It has developed the world's first adaptive array transceiver technology operating in the millimeter-wave Ka bands for cellular communications. It has been long believed that the millimeter-wave bands had limitations in transmitting data over long distances due to its unfavorable propagation characteristics.

Samsung claims its new adaptive array transceiver technology has proved itself as a successful solution. So far, the South Korean electronics giant claims it can transmit data in the millimeter-wave band at a frequency of 28 GHz at a speed of up to 1.056 Gbps to a distance of up to 2 kilometers.

The adaptive array transceiver technology, using 64 antenna elements, can be a viable solution for overcoming the radio propagation loss at millimeter-wave bands, much higher than the conventional frequency bands ranging from several hundred MHz to several GHz.

Don't start thinking about waiting on 5G handsets however, since these networks are still years away from being feasible. Samsung's new developments are promising but the rise of 5G networks will require so much more innovation from all areas of industry and government-funded sources before it is ready for mass usage. 5G services are not expected to be available until around 2020.
Tweet
Tags: Samsung 5G
<Google shares 15GB free storage between Gmail, Drive and Google+ Photos >Netflix brings Disney flicks to UK, Ireland subscribers
Previous Next
Comments have been disabled for this article.