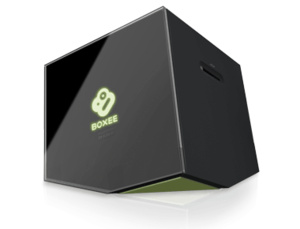 Samsung has acquired the media software (and now hardware maker) startup Boxee for $30 million.
The Israeli company had been looking for a buyer for the last few months after it appeared raising more money would be tougher than expected.

"We can confirm that Boxee will be joining Samsung. We'll have a formal statement on our website later this week," a Boxee spokesperson said, leaving out any other vital information. Boxee's 40 employees are expected to keep their jobs.

Since founding in 2007, the company has raised $30 million, so investors will at least get their initial investments back.

Boxee creates media software for desktops and also offers a set-top box that connects to many streaming services and includes the company's own software for playing local content. Samsung will most likely integrate the software into their Internet-connected Smart TVs into the future.
Tweet
Tags: Samsung Boxee acquisitions
<Bebo founder buys back company for $1 million after selling for $850 million >Samsung has shipped 20 million Galaxy S4 since launch
Previous Next

Who on earth would buy out boxee , I have just given mine away .. its terrible , compared to the likes of new media players , and the interface is all over the place .. better on a pc for free , I think .. but then you might as well go for XBMC .

wonder what theyll do ...