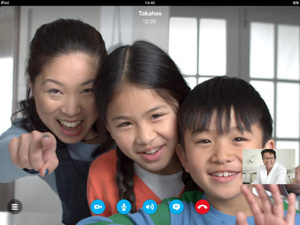 The latest version of the Skype app for Apple's iPad and iPhone 5 devices has added support for HD video calling.
A HD front camera was added to the iPad with the released of the fourth generation model of the Apple tablet, but up until now the mega-popular Skype app only included support for standard definition video calls.

Now the Skype for iPad 4.1 update adds support for HD video calling, as does Skype for iPhone 4.1, if you have an iPhone 5.

The only other changes in the apps for the iOS devices include general improvements to call quality and stability.
Tweet
Tags: iPad Skype Skype App Apple iPhone 5
<ZTE Open with Firefox OS to sell on eBay >Xbox One will work without Kinect switched on
Previous Next Write a comment
Comments have been disabled for this article.