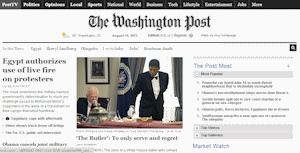 The Washington Post has said that its website was hacked by the supporters of Syrian President Bashar al-Assad.
The website of Time and CNN were also reportedly caught up in the hack that targeted a third-party link recommendation service Outbrain,

"We are aware that Outbrain was hacked earlier today and we took down service as soon as it was apparent," Outbrain revealed on its blog.

"The breach now seems to be secured and the hackers blocked out, but we are keeping the service down for a little longer until we can be sure it's safe to turn it back on securely."

Links on the effected news sites redirected users to the website of the Syrian Electronic Army (SEA). The Washington Post said it was working to resolve the issue, while CNN said it quickly identified the threat and disabled the third party plug-in.

Time spokesman Daniel Kile said that the Time website itself had not been directly effected, only the Outbrain-powered module on Time's pages.
Tweet
Tags: Cybercrime
<Online retail sales will double in Europe by 2018, research firm says >Nintendo ordered to pay $15 million for 3DS patent infringement
Previous Next

Would that be the Syrians from Damascus, or the 'Syrians' from Tel Aviv?

We once had a empire and it was led by an emperor then we had a kingdom which was led by a king. Now we have a country.
Comments have been disabled for this article.