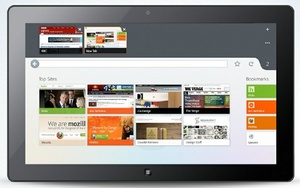 Mozilla has confirmed that its Windows 8 'Modern' version of Firefox has been postponed, again, this time until January.
The company had estimated an early December launch for the touch version of the browser, following two prior delays.

A "Preview Release" will still be released on Tuesday along with the alpha build of Firefox 26.

Mozilla started developing their Modern edition 18 months ago, with a very basic preview released alongside Windows 8 in October 2012. At the time, the company expected the browser to be completed by January 2013. That clearly did not happen.
Tweet
Tags: Firefox Windows 8 Modern UI
<Tencent buys 36.5 percent stake in Sohu search engine >Netflix uses piracy to pick TV shows, movies
Previous Next

I hate the Metro interface more than beets. And I despise beets.

Why no just skip "The Browser" and go for the OS.
- W8 socks anyway. Just saying.