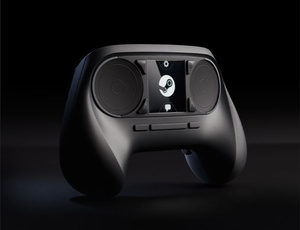 Valve has announced "a different kind of gamepad" this week, the Steam Controller.
The controller uses two circular trackpads rather than standard D-Pads or buttons.

Adds the company, "Driven by the player's thumbs, each one has a high-resolution trackpad as its base. It is also clickable, allowing the entire surface to act as a button. The trackpads allow far higher fidelity input than has previously been possible with traditional handheld controllers. Steam gamers, who are used to the input associated with PCs, will appreciate that the Steam Controller's resolution approaches that of a desktop mouse."

What Valve wants to do is make "whole genres of games that were previously only playable with a keyboard and mouse" playable in the living room. "In addition, games like first-person shooters that are designed around precise aiming within a large visual field now benefit from the trackpads' high resolution and absolute position control."

Additionally, the new controller also features "a new generation of super-precise haptic feedback, employing dual linear resonant actuators. These small, strong, weighted electro-magnets are attached to each of the dual trackpads. They are capable of delivering a wide range of force and vibration, allowing precise control over frequency, amplitude, and direction of movement."

"The whole screen itself is also clickable, like a large single button. So actions are not invoked by a simple touch, they instead require a click. This allows a player to touch the screen, browse available actions, and only then commit to the one they want. Players can swipe through pages of actions in games where that's appropriate. When programmed by game developers using our API, the touch screen can work as a scrolling menu, a radial dial, provide secondary info like a map or use other custom input modes we haven't thought of yet."

Very good idea. I've never liked the analog sticks; I have a tendency to push them too hard on my ps3 controller and they snap out.

Interesting. I think it may just work. Definitely would like to try it.