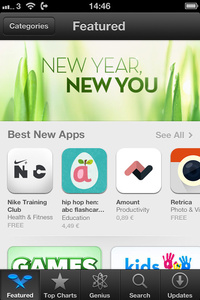 Apple's App Store has an incredible year in 2013, with customers spending more than $10 billion on the service.
In December alone, Apple customers downloaded more than 3 billion apps from the service, generating over $1 billion in just that month. To date, developers have earned over $15 billion from the App Store.

"We'd like to thank our customers for making 2013 the best year ever for the App Store," said Eddy Cue, Apple's senior vice president of Internet Software and Services.

"The lineup of apps for the holiday season was astonishing and we look forward to seeing what developers create in 2014."

The revolutionary App Store offers more than one million apps to iPhone, iPad and iPod touch users in 155 countries around the world, with more than 500,000 native iPad apps available.

iFolk have deep pockets. Then again I haven't paid but for a few Droid apps. Seems like most stuff is free'ish. Is it the same in the iWorld?

Those accounts have downloaded 50 billion apps, with 900,000 apps and 93% of those apps downloaded each month. .

<a hrep="http://www.celebrityballa.com/">Celebrity News</a>
Comments have been disabled for this article.