Sony Pictures has filed a DMCA takedown against 'Sintel', a 2010 short film released by the Blender Foundation with all materials available under a Creative Commons Attribution License.
The Blender Foundation develops and promotes the open source 3D graphics program Blender. It is a non-profit organization, funded by donations with the stated goal of providing the Internet community with access to 3D technology.

To showcase what you can do with Blender, the Blender Foundation has released several movies since 2006 that were developed with the system.

The latest movie is Sintel, which was released in 2010 and has been available on YouTube ever since, until now. Trying to view the video on YouTube now results instead in a notification that the video contains content from Sony Picture Movies and Shows. 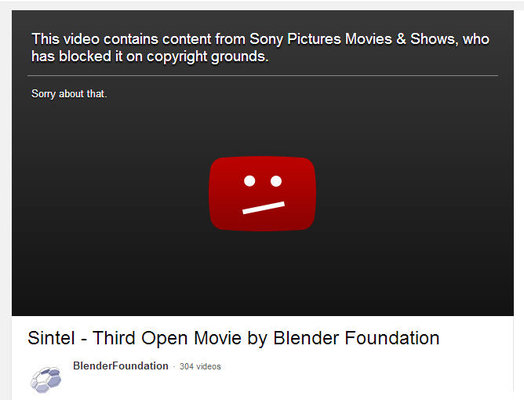 Of course, there is one slight problem; Sony Pictures does not own the film or anything in it. All the materials used to make the short film were original materials, and have been licensed as Creative Commons Attribution 3.0, so you can freely share the material.

The DMCA is most likely an error, but it brings up an important question surrounding DMCA takedowns on sites like YouTube; is it OK that videos can be so easily removed with DMCA takedown requests?

Quote: it brings up an important question surrounding DMCA takedowns on sites like YouTube; is it OK that videos can be so easily removed with DMCA takedown requests?

NO...especially when it is so imbalanced. If Sony uses something of mine in one of their videos, my takedown request would be ignored. If I use nothing belonging to Sony, they can take down my video without any reviews.

no company should have the power to have videos removed without proof of copyright infringement.
I have a youtube channel and have had to click 3 links on my gameplay videos so far to achknowledge copyrighted content was used in them but no takedown notices.