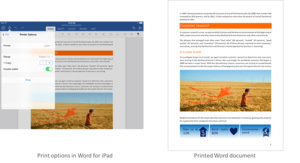 Fast forward a month later and Office for iPad has more than doubled that tally with 27 million downloads, according to Microsoft's Office Division manager, Julia White, announcing it at the TechEd customer conference in Houston, Texas.

Microsoft has said that it has more than 4.4 million paid users of the personal versions of Office for iPad, suggesting that a lot of downloads from business users with corporate Office 365 accounts.

Source: BusinessInsider
Tweet
Tags: Microsoft Office for iPad
<EA to cease online service for 50 games by July >Xbox Live Gold requirement for Netlix, Hulu to be scrapped?
Previous Next Write a comment
Comments have been disabled for this article.