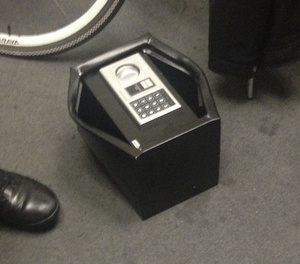 Ninemsn offices evacuated and bomb squad called in after a 'suspicious package' was delivered to a journalist.
Ubisoft has admitted that it was a PR stunt that simply went wrong. A courier delivered a safe to Ninemsn offices in Australia square earlier this week, with a letter informing a journalist to check his voicemail. However, the journalist had no voicemail.

When staff entered a pin code into the safe, it began to beep. Unsure of what to do, they called the police and evacuated staff from the area.

The bomb squad arrived and opened the safe in the basement of the building, finding only a copy of Watch Dogs, a beanie and a baseball cap, along with a note saying it was embargoed until 5pm.

Ubisoft admitted that the PR stunt didn't go according to plan, as the publisher was unable to leave a crucial voicemail for the journalist explaining what was going on.

"This is definitely the other side of the line in terms of what it's safe for a PR company to send anonymously to a newsroom. The thing was black, heavy and slightly creepy," Hal Crawford, editor at Ninemsn, told Mumbrella.

"We did check with other newsrooms to see if they had received a similar package as we thought it was a PR stunt, but no-one else had. We weren't panicked at any point, but given there was no note explaining what it was, we had to take sensible precautions."

That seems like quite an overreaction - who actually believes that bombs delivered by courier would look like that?

As for Ubisoft saying that the stunt didn't go according to plan - that may be true, but it definitely got a lot more publicity than it would have if it did go to plan.

Quote: That seems like quite an overreaction - who actually believes that bombs delivered by courier would look like that?

Isn't that a redundant question; considering the newsroom people did, lol. Just goes to show you how paranoid everyone has become over the years.

The odd times of today: when iSheep, faggot, nigger etc. is more acceptable now on days that the word BOMB!


Live Free or Die.
The rule above all the rules is: Survive !
Capitalism: Funnel most of the $$$ to the already rich.
329.5.2014 15:43
Ripper
Send private message to this user
AfterDawn Addict

Quote: "That seems like quite an overreaction - who actually believes that bombs delivered by courier would look like that?"


"Overreaction"? That's a pretty stupid comment. Did you think that through before writing it?
Would you expect that bombs delivered by couriers should "look like" bombs, and perhaps have a little courtesy note attached reading "Yes, I am a bomb"? Good grief!
531.5.2014 03:13
xboxdvl2
Send private message to this user
Senior Member

@Mrguss some american gaming sites have banned the word bomb in chat.

(on topic)
people are paranoid in general caused by the media.I think in a way its an over reaction but they got a suspicious package and had it actually been a bomb the actions they took would of been correct.
A black safe and a message saying check your voice mail sounds more like extortion or blackmail rather than a bomb threat, well to me it does.

Most Americans & "West-Europe" are paranoid about the word bomb, I wonder why !?
After U.S. declared war to how many countries since 1812, in the name of the (Rich-Class) Capitalist Imperium.

Do you really think what the brain-wash Media tell to the people that those trying to hurt U.S. have jealousy of the way we live here in America: Where most of their people live in debt and drugs in this fake country.