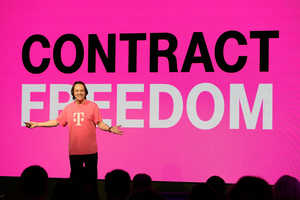 Last week, word hit that Sprint was preparing a $32 billion bid for T-Mobile US, and all eyes turned to one man, current TMUS CEO John Legere.
Legere has helped turn the company around over the last five years, and is now the clear favorite to be CEO of the merged company, if the acquisition does occur. Legere has become somewhat infamous, at least among high-level telecom executives, since he wears pink colored carrier-branded T-shirts, even to important meetings, and is known to taunt competitors and individuals on Twitter and in press releases.

TMUS has been the fastest growing carrier thanks to its "Uncarrier" campaign which includes buying out early termination fees if you come from an other carrier, offering free international roaming and texting, no contracts, and all-you-can-eat truly unlimited plans for as low as $70 per person.

Sprint, which is now majority owned by SoftBank of Japan, will offer 50 percent stock and 50 percent cash for the carrier and the combination of the two smallest major U.S. carriers would give Verizon and AT&T a major competitor, at least as far as spectrum, network and subscribers go.

Both Sprint and T-Mobile are large money losers, however, but at least TMUS is gaining an impressive amount of customers each quarter. Sprint has lost 2.5 million contract customers in the past five quarters, alone.