Recent headlines | VPN provider wins a court fight: police can't get or use its database
AfterDawn > News > 'Super Smash Bros' for Wii U has its release date

'Super Smash Bros' for Wii U has its release date 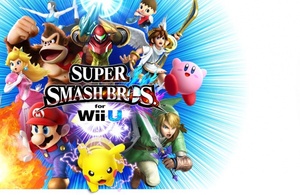 Nintendo fans rejoice: The Wii U version of 'Super Smash Bros' finally has its release date.
The console version will be released on November 21st, a couple of months after the 3DS saw its own version launch. That game has already sold 2.8 million copies.

Using a $20 adapter, the game can use classic Gamecube controllers and Nintendo is selling Smash Bros-themed GameCube controllers for $30 if you want to go all out.

The game features 36 popular Nintendo characters and a plethora of new weapons and environments.

Tweet
Tags: consoles Nintendo Wii U Super Smash Bros.
<iPhone 6 now plagued by its next scandal: 'Hairgate' >VIDEO: Malware used to steal cash from ATM machines
Previous Next
Comments have been disabled for this article.