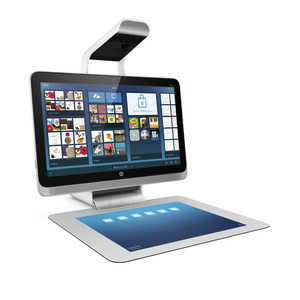 HP has introduced a new all-in-one touchscreen PC this week dubbed the Sprout that features a strange new projector/3D scanner and a 20-inch mat that allows you to turn your desk into a tablet.
The company says the Sprout is their first "Blended Reality" device in an "effort to streamline the interface between real and virtual objects."

While those are standard mid to high-end specs, the reason you are getting the PC is for the projector. The projector faces downward and projects a touch-sensitive keyboard onto the mat which allows for typing and gestures. In addition, the "HP Illuminator" also acts as a scanner and allows you to move "documents or objects in front of the computer, scan them with the Sprout's 14.6-megapixel and depth-sensing Intel RealSense cameras, and then use the multitouch mat to move those scanned objects around and resize them," reads Wired's review.

The Illuminator is also a 3D scanner, however at launch it will be limited to 2D scanning. The 3D scan turntable and HP-built 3D modeling software will be available sometime after May of next year.

Does anyone remember the "laser keyboard"?? Hmmm????

While the idea is cool and the 'possibility' of using 'anywhere' is nice, NO ONE IN THEIR RIGHT MIND wants to type on a hard service with no button pressing.

People will buy this piece of crap then immediately go out and buy an F'ing keyboard.

the only reason i read this was the 3D scanner/projector.... but that isn't going to be available for months.... if you need a computer now you can buy a $500 one with close to same specs now.... wait 6 months the price will fall on this though not the $500 spent on an interim computer, enough to be worth the extra to have two computers THAT DO WHAT THEY CLAIM THEY DO

definitely wait until this hardware does what it claims it can do, even delaying a bit longer... buying a modest machine if you must buy new now
$2k is just too much to spend on future tech when current tech does so much of the same thing


qazwiz is qazwiz everywhere. If you see me say HI!
Comments have been disabled for this article.