Here is the Jolla tablet

Finnish startup Jolla reached their crowdfunding goals for the new Jolla Tablet within 2 hours, and is now close to pushing $1 million in funding.
The device, which runs on the upcoming Sailfish OS 2.0 operating system, will have high-end specs with an interesting design to go along with a price tag cheaper than all current comparable tablets (iPad Mini 3, Nexus 9, Nokia N1).

Most interestingly about the device, besides the open-source Sailfish OS, is the fact that you can run Android applications, significantly expanding the library of available apps for the device. Sailfish, since being launched last year, has had nine major updates adding 350 new features, and 2.0 should be a lot more stable and offer better performance.

Jolla was quick to boast about the multitasking ability of the new operating system. "Multitasking on Sailfish OS shows all your running apps conveniently in one single view. At a glance, you'll see everything that's going on, as well as easily switch between apps. You can also control Sailfish OS apps directly from the multitasking view – for example, change your music or play and pause your video stream without opening the app in full," reads the page. In addition the tablet will work almost entirely with gestures, making simple tasks easier. 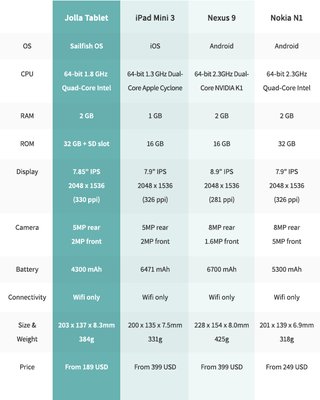 Interesting .... seems like good specs for 189 usd but small battery i wonder how long is the runtime ?

On it's official page it says the next 1000 tablets cost 209 usd plus 20 for shipping ! Still not a bad price for those specs .

But my Country is not one of the supported Countries and no mention of runtime !

I just hope that Sailfish is based on some version of BSD so that there will be no patent suits filed against it.