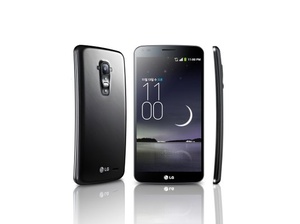 According to new reports, LG is preparing a second-generation G Flex smartphone for launch at CES next year, in early January.
The first Flex device was notable because it featured a curved OLED screen and a back panel that has "self-healing coating" meaning scratches disappear over time as long as they aren't majorly deep.

Obviously, the details of the new sequel are unconfirmed, but the device is expected to be a "major upgrade" over the first-generation model. The phone is expected to move to a 1080p display, get thinner and lighter, the self-healing coat is significantly improved, and the main components are also expected to see upgrades.

In addition, the actually flexibility is also supposed to be getting an upgrade, thanks to a new hard rubber chassis.

There will be much more to know at CES next year.

Ummm.....correct me if I'm wrong, which I rarely am but didn't this first "Flex" piece of sh*t flop in sales??

Who in their right mind would want to own a permanently flexed and curved phone?? Not comfy in pocket, bulky in book bag, will crush if in back pocket and you sit.

Curved TVs aren't far behind that STUPID IDEA EITHER.

The first thing that crossed my mind when i saw it in the store was that it looks like a giant maxi pad.

This curved garbage (TV, phones, etc.) never gonna take off. It's just a marketing tool for profits by squeezing $$$ from all the sleeping sheep's.

Originally posted by Mrguss: This curved garbage (TV, phones, etc.) never gonna take off. It's just a marketing tool for profits by squeezing $$$ from all the sleeping sheep's.

Can't wait, the first one was amazing.. I love that phone.

Originally posted by ispeedca: Can't wait, the first one was amazing.. I love that phone.