Alibaba gets into the smartphone business 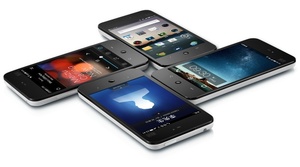 Chinese e-commerce giant Alibaba has gotten into the smartphone business after taking a large stake in Meizu.
The company has paid $590 million for a minority stake in the company, which has a 2 percent share of the Chinese smartphone market.

Alibaba will use the deal to get more exposure for their own mobile operating system by placing it on Meizu handsets. Meizu will get access to Alibaba's e-commerce sales channels and other resources in exchange.

In China, the once fragmented market is quickly becoming a three-horse race with Xiaomi, Apple and Samsung leading the way. The top five brands in the country accounted for about 60 percent of all sales in the last quarter.

For Alibaba, the move is an expensive experiment to try to reach out to even more of China's 550 million mobile Internet users, who will then potentially be hooked on Alibaba's core products.

Two of the largest ghetto-run havens for piracy and counterfeit knockoffs.

But.....there are plenty of no-taste, cheap mofos out there willing to shop this crap site and pay 10 dollars for a pair of Soul by Ludacris headphones that look virtually identical to the original.....but in fact are absolute and profound garbage.