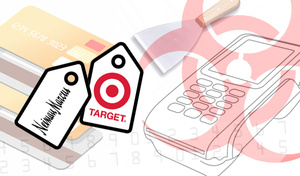 In 2013, Target had a massive data breach in which 70 million customers had their credit and debit card information stolen.
Today, the company has finally revealed the losses it took from the breach, a staggering $162 million.

In 2013, the company booked a $61 million gross loss and $191 million for 2014. Cyber attack insurance covered $90 million over the two years. Those figures could get larger in 2015 as the retailer faces a number of class action lawsuits.

In recent months, attacks on retailers and other companies have escalated, culminating with a breach by Anthem Health, one of the largest health insurance companies in the U.S.

Turn off the INTERNET for good. People will get used to it eventually.

Originally posted by Dragon3000: Turn off the INTERNET for good. People will get used to it eventually.

Use and discard or keep people's information on a closed circuit....this is security 101 stuff.
Powered By