Star Wars saga gets the Lego treatment with special mini-series 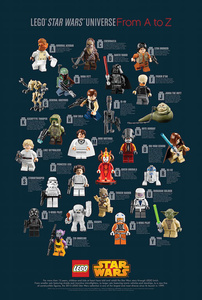 Disney XD has picked up the 'Lego Star Wars: Droid Tales' mini-series, five 22-minute episodes that will retell the first 6 movies in the series with Lego protagonists.
The series will air later this year, concluding before the hotly anticipated Star Wars: The Force Awakens blockbuster opens worldwide on December 18th.

According to the writers, the original and prequel movies will be retold through the eyes of popular droids C-3PO and R2-D2. The droids have been kidnapped after the events of Return of the Jedi, leading them to tell their story of what happened, from the very beginning.

There was little other details, but Star Wars and Lego fans should be very excited.

Source:
THR
Tweet
Tags: Disney Lego Star Wars
<Verizon could be finally getting the Nexus 6 >Dropbox teams up with Vodafone to give cloud storage access to 400 million wireless customers
Previous Next
Comments have been disabled for this article.