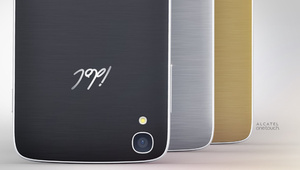 Alcatel, known for their extremely low-priced smartphones, has unveiled a new phablet today at MWC that has nice specs and will sell for $249 unlocked, undercutting every other OEM in the space.
The new Idol 3 has a 5.5-inch 1080p display, an octa-core Qualcomm Snapdragon 615 processor, 2GB RAM, 16GB internal storage, dual front-facing speakers powered by JBL, two microphones (meaning you can pick up a phone call from any direction), dual cameras 8MP/13MP (which is great) and both have wide-aperture lenses and LED flash.

Perhaps most importantly, the device packs a relatively large 2,910mAh battery into a thin 7.7mm thick body. The device has LTE support on GSM bands in the U.S.

The Idol 3 will launch with Android 5.0.2 and Alcatel's own UI, which is a slight variant of stock Android.

At $249 unlocked, Alcatel, despite not being a household name by any stretch, should be able to break into the phablet market with a strong showing at such a cheap price. By comparison, Google's Nexus 6 retails for $649 and Apple's iPhone 6 Plus retails for at least $749 when unlocked.