Tidal will let you bring over your Spotify, Rdio playlists 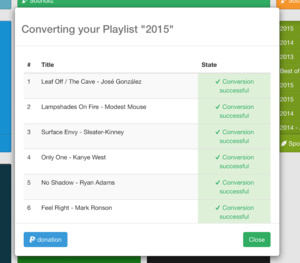 Tidal, the high-fidelity music streaming service recently acquired by Jay-Z, has announced a new partnership that will help rival service users to bring over their existing playlists.
The partnership is with a company called Soundiiz, which will let you connect to your Spotify, Rdio, Xbox Music, iTunes and Soundcloud accounts to convert your playlists over to Tidal.

Soundiiz is currently in beta and nearly everyone who has used it says there are plenty of glitches to go around, mainly related to translation and text issues.

Overall it appears that Soundiiz, and Tidal in general are still works in progress but Jay-Z and his group of A-list musician friends are well on their way to competing with the big boys.

Source:
Verge
Tweet
Tags: Spotify Tidal Soundiiz
<AMD: Microsoft to launch Windows 10 at the end of July >One analyst believes the Apple Watch will be the company's most profitable item ever
Previous Next
Comments have been disabled for this article.