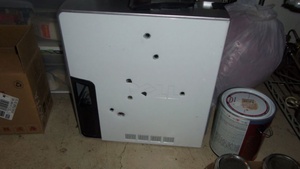 Lucas Hinch of Colorado Springs could face a penalty after shooting his ill-performing computer eight times.
Hinch was detained very briefly for discharging a firearm and cited, but a judge will decide what kind of penalty (if any) he receives.

"He was having technology problems, so he took it to the back alley and destroyed it," a police spokesman noted.

"He got tired of fighting with his computer for the last several months," added police spokesman Jeff Strossner.

Apparently, Hinch's computer would not reboot and the standard ctrl+alt+del features were not accessible to him.

Man executes his computer in alley behind his home. Cited for discharging a firearm in city http://t.co/eI8P54l4vI via @CSPDDutyLt

The computer had it coming :)

It's very relaxing. 20 years ago I took mine out to a baseball diamond (it was broken beyond repair and it was too old to bother replacing parts) so I took an aluminum bat to it. I made sure to have all the parts inside unscrewed so I could play baseball and then I took hard blows to the chassis. I did clean up the mess afterwards. I also made sure nobody was around at the time I did it, as I didn't want to explain to the cops my fits of rage at a machine.

I guess this is what is called Rage Against the Machine.

Originally posted by thatBeatsguy: I guess this is what is called Rage Against the Machine.

Looks like a Dell Dimension.
Poor old thing.
Mine (albeit with several upgrades) is still going strong, great PCs in my opinion ;)

He missed the power supply, LOL.

i wonder if the bullet pierced the heat sink. the aluminum they use is pretty good at stopping projectiles.

Originally posted by Interestx: Looks like a Dell Dimension.
Poor old thing.
Mine (albeit with several upgrades) is still going strong, great PCs in my opinion ;)

Yeah...but it doesn't count as "still going strong" when you have to replace all the capacitors yourself.

Originally posted by DXR88: i wonder if the bullet pierced the heat sink. the aluminum they use is pretty good at stopping projectiles.

That all depends on the projectile. I've seen what a 10MM auto does to solid steel plate...but then I've also seen a 45 ACP bullet bounce around inside a beer can rather than punch through the back side (to be fair this doesn't happen much).