Samsung's upcoming Gear smartwatch will be round 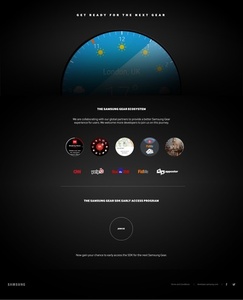 Samsung has revealed that its upcoming Gear smartwatch successor will have a circular display, keeping in line with the more popular non-Apple Watch designs.
In addition, the company will release their SDK for the Gear to developers even before the launch of the product, to ensure everything is smooth when it is released as current Samsung developers move away from the boxy shape of the previous smartwatches from the company.

"Samsung has actively adapted its approach to wearable device development as the leader of the rapidly developing category," said JK Shin, CEO and Head of IT & Mobile Communications Division at Samsung Electronics. "Through meaningful and progressive innovation, Samsung welcomes to developers and industry leaders to join this open collaboration effort to enrich and create unique user experiences for a new smart mobile life."

In their teaser media invite, the company promises apps from CNN, Yelp, Fidme, Baidu and Apposter as well as a specialized weather app.

If you are a developer, check out developer.samsung.com/wearable to get early access.

Source:
Android Central
Tweet
Tags: smartwatch Samsung Gear
<Apple Watch Edition to cost over $30,000 in Brazil >Best Buy to support Apple Pay on iOS now and in-store later this year
Previous Next
Comments have been disabled for this article.