Oculus sends out invites to special event on June 11th 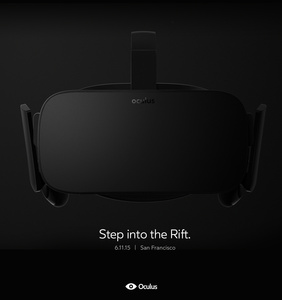 Oculus VR has sent out press invites to a special event on June 11th, with more information about next year's consumer headset likely to be unveiled.
The company also announced that pre-orders for the consumer launch would begin later this year, so there is a good chance we will get a better look into the hardware specs of the device.

Earlier this month the company finally confirmed the release of the consumer model, which will follow a couple of developer models.

Oculus also released the minimum specs for your VR headset to ensure everything runs properly including an Intel i5-4590, a GeForce GTX 970 and 8GB RAM.

This WILL be the birth of a whole new world of gaming. guaranteed.

Originally posted by doowop72: This WILL be the birth of a whole new world of gaming. guaranteed.

Not just gaming. With vr tech like this being in a position to be mass marketed/produced, the possible applications are endless.

with recommended specs like that, it will be a good 5 years after mainstream release to even be feasible to the Mass Market.