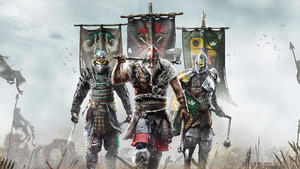 Ubisoft has unveiled a new game, For Honor, a new kind of "melee combat experience."
The game allows you to start war as a knight, Viking or Samurai.

"Carve a path of destruction through the battlefield in For Honor! Enter the chaos of a raging war as a bold Knight, brutal Viking, or mysterious Samurai, three of the greatest legendary warriors. For Honor is a fast-paced, competitive experience mixing skill, strategy, and team play with visceral melee combat.

The Art of Battle, For Honor's innovative control system, puts you in total control of your heroes, each with distinct skills and weapons, as you fight for land, glory, and honor. As a skilled warrior on a believable battleground, you annihilate all soldiers, archers, and opposing heroes who stand in your way," reads the company's press.

For Honor will launch next year for XBO, PS4 and PC.

None of that is actual gameplay.......only interludes.

Originally posted by hearme0: None of that is actual gameplay.......only interludes.

So you're saying the multiplayer video, which shows actual gameplay, is not real. Care to elaborate?