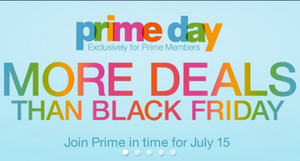 Amazon is celebrating their 20th anniversary with the aptly named "Prime Day," a shopping day that the retailer hopes will trump Black Friday.
Says the company: "Next week, Amazon turns 20 and on the eve of its birthday, the company introduces Prime Day, a global shopping event, offering more deals than Black Friday, exclusively for Prime members in the U.S., U.K., Spain, Japan, Italy, Germany, France, Canada and Austria.

On Wednesday, July 15, new and existing members in the U.S. will find deals starting at midnight, with new deals starting as often as every ten minutes. They can shop thousands of Lightning Deals, seven popular Deals of the Day and receive unlimited fast, free shipping."

Amazon is even extending the festivities to new customers who sign up for the 30-day free trial of Prime, as long as they've signed up before the 15th. Amazon has promised Lightning Deals from nearly every category, so there could certainly be some great deals available.

As everyone probably knows by now... This scam SUCKED!! Yes there were thousands of sales on CRAP. And the very few great deals were sold out in seconds. I had a 49 in Vizio 4k TV in my wish list for months. It is regularly $748.... During the sale they had it for $599. By the time I had seen that it was on sale.... I had to get on a wait list.... For which I ended up being over 500 in line. Of course I didn't get one, however, Amazon still had more left for the regular price. REALLY Amazon?? You cap the amount of products that can be bought during a sale.... Way to screw your members.... Especially ones that were members BEFORE the 15th. Suffice it to say they missed out on a guaranteed sale.... I would have bought at $599 but I will not buy at $748.... Especially when I know they had more left. Screw you Amazon!!